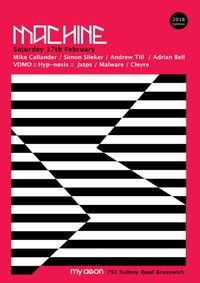 M A C H I N E System reset. And we’re back. After a 2 month layoff Machine returns on Saturday February 17 with our first party of 2018. 1 of 11 scheduled for the year, in our shiny new time-slot of the 3rd Saturday of the month. Bank it.

We’re thrilled to welcome back Mike Callander; who some of you may recall was a founding resident DJ at Machine all the way back in the beginning, 8 years hence. He joins standing residents Andrew Till and Simon Slieker in the main room; with the thrilling addition of Bunker’s Adrian Bell guaranteeing a tour de force of the many facets of the techno-sphere.

We’re rapt to announce publicly the addition of our first resident Live Visual Artist: VDMO. Anyone who has witnessed his room transforming work through the latter part of 2017 would have experienced his staggering spectacle. Projecting onto 3 walls with oscillating geometric vistas that create a dimensionality to the space that is tantalising, captivating and inviting. We’re delighted to make him a mainstay.

Upstairs we have an equally tantalising combination; the Hyp-nøsïs crew have assembled a talented team offering a vast array of sound ranging from ambient electronica through to dark noise based sound. Featuring Juxtpose / JXTPS, Malware and duo @Cleyre.

Mike Callander is one of those artists who somehow manages to channel excellence into the dual realms of DJ’ing and production. What we love about Mike is his ability to cast a line out to the dancefloor that establishes connection and relationship. He has rediscovered the lost art of weaving the threads of cadence, tempo and intensity; there are peaks and troughs, there is escalation tempered with respite; these features drive the experience and loom larger than genre or definition. When Mike plays you can’t help but feel a part of it, a part of something mesmerising and intelligent. The truth is undeniable: dancing to Mike Callander makes you smarter.

Adrian Bell is an international man of mystery. Somehow ageless, somehow timeless. Although we’re pretty sure he’s quite young. Compared to us. He is a wellspring of understated talent. He consistently pulls out ripping sets that evoke head shaking and nodding, the former in bewilderment, the latter in approval. He has taken Bunker to great heights with his talent, his team and his nouse. The truth is we’ve been trying to book him for months. And this month we got him. Now we’ll let him get you.

Andrew Till [Machine] Read about the long and fabled career of Andrew Till here. https://machinelabel.co/about-andrew-till

Simon Slieker [Machine] Read about the almost as long and nearly as fabled career of Simon Slieker here: https://machinelabel.co/about-simon-slieker

Cleyre is a collaborative project between Nat Salih and Brett McDonald, borne out of their shared and divergent histories and experiences in various musical contexts. A mutual appreciation for richly articulated soundscapes, polyrhythms and long-form sets sees them drawing influence from pioneering techno scenes in Germany, Italy, Japan and Sweden.

Malware is a long time lover of electronic music, and a common fixture of many dance floors and lighting booths in Melbourne. In 2016 he moved to the other side of the decks as a key part of the Hyp-nøsïs events, showcasing deep techno and experimental music in little used spaces around town. With a passion for any music thats ‘real’, including jazz, abstract, broken beats, noise and more, his sets are influenced by the different sounds from a broad array of genres. https://www.facebook.com/malware444/

JXTPS is a live Techno and DJ act hailing from Melbourne Australia. Formerly known as Juxtpose the name change was to highlight a shift in sound. JXTPS enjoys a variety of moods as it suits him - from dark and heavy to ambient and surprising.

He has released with labels Labrynth, Planet Rhythm, Circular Limited, Fanzine and most recently on Suara. 2018 will also see his first tape release on French deep techno and ambient label Lett Records. As a live act he has performed at the now defunct Pleasure Planet parties and twice at Strawberry Fields Festival, as well as supporting Giorgio Gigli for Bunker. His live set is constantly shifting and evolving. https://www.facebook.com/jxtps/

In mid 2016 JXTPS and DJ Malware have been regularly putting on experimental, ambient and left field parties as Hyp-nosis and User Mood. This month they’re bringing it to Machine.

VDMO, has brought an incredible live projection array to three walls of the main dance floor transforming the space into a a chamber of dimensionality and depth. Programmed live geometric patterns twisting and riffing off the Machine design aesthetic. VDMO brings the visual aspect of the evening to dizzying heights.

Machine is a techno club with the vibe of an arts precinct. Run by electronic music veterans Andrew Till and Simon Slieker, the club attracts quality artists from around the country and the world. Spread over two levels each with topflight Function One sound systems and an enormous open garden area, there is always differentiation between cold and hot, hard and soft, dark and light, dry and wet, distinct and indistinct; Machine exists in this duality and celebrates the diversity it affords: old and young, queer and not, gendered and not. We invite you into the mix for the nighttime adventures to come.