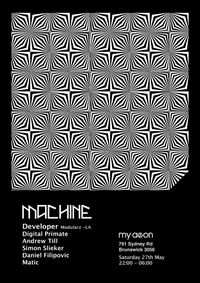 Machine is excited and proud to present for the month of May all the way from LA, one of the signal beacons of world techno, producer of rolling drum laden loopy gems, incredible dj of 3 deck vinyl mayhem and owner/manager of the pristine tech imprint Modularz. Who are we speaking of? None other than DEVELOPER> You may have seen him courtesy of Bunker in April 2015. That show created a stir. Now two years on we expect the name may have penetrated beneath Melbourne’s techno epidermis. This one is going to be red hot.

Developer Hailing from LA’s seminal and nascent techno scene in the early 90’s, Developer cut his teeth in radio, then the distribution side of the industry assisting with top flight labels Axis, Reload and Plus 8, to name a few. Over the course of two decades he helped forge a culture that today is reaching its zenith. Event production, dj’ing and music production were the way forward for Developer, and finally label curation and management. Modularz is fabled on the world techno stage, and Developer, is clearly one of the techno artists at the cutting edge of the blade. Much of his acclaim in the performance arena has been built on strong marathon sets and quick programming skills as well as the ability of playing 50 tracks per hour on 3 turntables with effect processor and sampler. And with this background he now condenses this brute ability into the CDJ domain. And that’s why we’re excited to see and hear him over an extended Machine set over the Function One system.

Stay tuned for a run of publicity, interviews, mix and track links to Developer. If you’re not excited, you’ve got plenty of headroom, before May 27’s 3 hour + performance.

Digital Primate In support for the night we’re proud to present the world premiere of the new DIGITAL PRIMATE: MNTNS OF SLNCE project. Last year DIGITAL PRIMATE disappeared into the wilds, emerging 6 months later with a bristling new set of compositions. Recorded in Iceland, Sweden and Ireland and inspired by the otherworldly vistas of these unique territories, the album features a robust techno soundscape to match. This performance will be accompanied by a live mixed projected visual scape captured on location. DIGITAL PRIMATE is a long term beacon of Melbourne techno, the founder of Centriphugal (Melbourne club of legend), most recently living in the Netherlands and running the Beatport artist studio. His most recent production outpourings have come with wide acclaim across the industry…….. MNTNS OF SLNCE has garnered the support of Carl Cox to the degree that he’s creating a new Label on which to feature the album. All things point to this being a unique and compelling moment in the life of the PRIMATE> so exciting to present this premiere on this night at Machine. Stay tuned for linkages to more Digital Primate offerings.

Daniel Filipovic Daniel is an all vinyl architect of sound. Smooth as fondant and clean as a whistle, his mixing is a dreamy blend of melting and gushing. Definitely something to get excited about in the warm and loved up surrounds of the upstairs Function One den of audio inequity.

Matic One of the gifts Melbourne has received in recent times is the arrival of Matic. Arguably the most well travelled import to date, and possibly one of the most accomplished behind the decks. 15 years learning and plying the dj trade across several continents. Stints in pivotal cities Amsterdam and Barcelona and working partnerships with pioneering artists. Matic has worked across this city and with multiple crews, clearly appreciated by many. For a great and customarily in depth read on Matic and the wonderful accompanying podcast check out the NODE cast: https://soundcloud.com/sfbm/node-presents-matic-nd003 And Then go over to the SILO podcast feature as well: https://soundcloud.com/silo-productions-melb/mix-series-07-matic?utm_source=soundcloud&utm_campaign=share&utm_medium=facebook

MACHINE Architects of Machine: Andrew Till and Simon Slieker will also feature downstairs in and around Developer and Digital Primate. You can expect more of their robust, solid, sweet and textured offerings. Both gents being mainstay contributors to all that techno has become in this town, you know what you are getting, even when you have no idea.