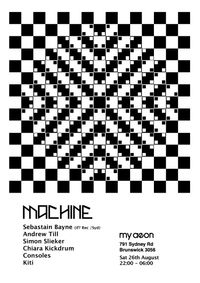 Machine: IF? this then that, feat. Sebastian Bayne

Machine: IF? that then this

In the depths of the Melbourne winter we’re dragging down a little bit of Sydney sunshine with the anticipated return of Sebastian Bayne. Head of IF? Records and frequent touring artist to Europe, Sebastian has been somewhat of a regular at Machine over previous years. Meticulous in his dj’ing approach, Bayne throws down enormous sets that come at you like waves on a beach break. Rise, peak, descend, rinse and repeat. Bring it on.

It’s time also for the equally anticipated return of Kiti and Chiara Kickdrum. Although it’s not quite right to speak of them together as though they are one, for they most certainly are not; each with her own style, repertoire and energy, and yet so often seen supporting one another and playing along side it’s easy to hold them up and celebrate the duo. Okay it stops here though for….

Kiti will be playing by herself and bringing all we know and love her for. How does a dj have so much groove and soul and at the same time lay down such grave and salacious techno. So often we have seen the dancefloor rise as one in response to an enthralling Kiti tryst.

Chiara Kickdrum will be playing solo, and bringing the exceptional talent she has seemingly flowing through her hands. We have no qualms in suggesting that Melbourne has been the greatest beneficiary in the trade that saw Chiara come to us from Italy. Over recent years she has grown into a musical force to be reckoned with… or not, if you are laid waste by her devastating artistry. Whether it’s live composition, performance or dj’ing Chiara Kickdrum is a mood magician, and in no safer hands can we leave you.

Consoles, we welcome to the Machine stage for the first time, and in good time. Hers is a name you will have been seeing over recent months after performances all over Melbourne. An up and comer in techno circles, and a dj with an acute acumen for the sound. Her take is certainly influenced by her musical training, but her attack is something only she could explain. Consoles can tear it apart or leave it whole and it’s this range that we’re sold on.

Andrew Till weaves dreams and sends them via sound waves which are often confused for techno.

Machine (est. 2009) is a techno club with the vibe of an arts precinct. Run by electronic music veterans Andrew Till and Simon Slieker, the club attracts quality artists from around the country and the world. Spread over two levels each with topflight Function One sound systems and an enormous open garden area, there is always differentiation between cold and hot, hard and soft, dark and light, dry and wet, distinct and indistinct; Machine exists in this duality and celebrates the diversity it affords: old and young, queer and not, gendered and not, clear and murky as fuck. We invite you into the mix for the nighttime adventures to come.