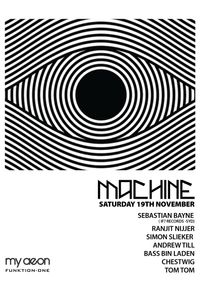 Surprise, here we are on the 3rd Saturday of the month, just to keep everyone on their toes. Don’t worry we’re not making a habit of bending ourselves around the calendar.

After an exceptional October with Antigone, we’re completely compelled about what November holds in store. The Inclusivity and Freedom from Harassment policy roll out in October had immediate results. The vibe and atmosphere at Machine were incredible.

Such freedom of and in expression from women and men alike took us back to days of old. So another big thank you to our community: we commend you and invite you to share in more of the same this month with one of our chief imports from the Sydney land of techno: Sebastian Bayne!

Sebastian Bayne: has drilled us with sophisticated and compelling performances on every occassion we’ve had him down, so we’re pretty excited to present him to you now. Those who have not had the honour, Sebastian is the label head for IF? Records and one of the chief archetects and custodians of the techno sound north of the border.

In support we bring you Ranjit Nijjer for the first time in a long time. Director of Technoir another iconic Melbourne bastion of our sound, Ranjit is a pillar, scholar and sonic arbiter. He’s just been on a European and Japanese odyssee that, by his own admission has changed him. And now he and his manifest blooming are coming to the Machine mainframe. We’re excited.

Meanwhile in a world that exists on the second floor we have a spectacular treat:

Featuring master of phat and phunky, of beats and styles, and on this special ocassion full throttle tech sound: Bass Bin Laden himself...

and joined by kingpin of Shadow Electric, champion of justice and master of the flambouyant the one and only: Dave Chestiwig.

And bringing up the rear in a very non descript and highly appropriate fashion: Tom Tom.

Upstairs is guaranteed to be a playground on another level (sic) of a different order.

Not to mention…which is a ridiculous turn of phrase as we go about mentioning the bedrock of the Machine sound, dj’s and leading lights in an already ilumined room: Andrew Till and Simon Slieker. Look ‘em up if you’re really not already aware.

That sums up Machine for November. Enough to get your rocks well and truly seen to.