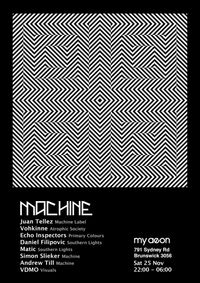 There is a strong argument to be weighed that the production of homegrown techno music and culture has never been stronger in this city. Evidence for such claims would need to be robust given the depth of historical capital extending back into our celebrated past.

November’s instalment of Machine is that evidence.

This is equally our strongest night of the year with regard to talent. This is an absolute feast of techno goodness, and it’s all courtesy of the featured local local labels making it on the world stage. Behold:

All on one night, at one event, and all in the same place at the same time for the first time…ever:

This event quadruples as the Australian launch party for each label’s new release as listed here.

Story: Founded in 2010 by Andrew Till and later joined by Simon Slieker and Matthew Drape the label has on display a cross section of Australia’s production talent, young and old, emergent and re-emergent, coupled with sounds from Europe and beyond. Machine Label is backed by the club of the same name which has proven to be somewhat of a signal beacon for a mature and considered revision of techno music, art and culture. Together Machine Label and Machine Club are bringing the world to Australia, and in so doing, taking Australia to the world.

Representing on the night: Juan Tellez, Andrew Till, Simon Slieker

Story: Started as an outlet for personal techno experimentation, Atrophic Society is the musical brainchild of Craig McWhinney. As both label Director and A&R, Craig has enjoyed the success of his own tracks (under his alias Vohkinne), as well as fathering releases and remixes by Ben Sims, Brendon Moeller, Tripeo, Patrik Skoog, Material Object, DJ Spider, Ground Loop, Gotshell, Jeff Derringer, Xhin, and most recently, Savas Pascalidis

Latest release: Brain Waves EP, Savas Pascalidis: Savas Pascalidis is an artist who needs little in the way of introduction. Having a career that spans the last 25 years, and releases on a staggering number of great labels (Gigolo Records, Kurbel, Non Series, Mote Evolver, Stockholm LTD, Children of Tommorow, Skudge, Figure and many more), we’re proud to welcome Savas to the Atrophic Society family. Brain Waves sees further exploration of the techno that defines Savas’ sound. Savage, grooving and dripping in nuance, all four cuts on this EP will set the night on fire.

Representing on the night: Vohkinne

Story: Primary [Colours] is simply a collection of inspired entities, in the pursuit of all things unrealised. Everything around us is in a constant state of transformation and entropy - moving from one state to another, primary's focus is on that transition.Primary continues to build up its roster of artists through personal connection in which we share like minded concepts and creation. The Primary Colours concept is planned to be a series of 12” coloured vinyls in blue, red and yellow. The Primary concept is not a cyclical loop. Blending these elements you take view of secondary colours, further iterations you view tertiary colours. This concept allows a rich tapestry of dance floor immersions.

Latest release: Mad Roy, 10 inch vinyl EP, Echo Inspectors & Silver Ash: Mad Roy< found its way from Brisbane to Melbourne to the Victorian Coast before finally finishing its journey on this limited edition 10 inch wax. Modulating synths. polyrhythmic percussion. tape delays and one massive bassline all work in tandem to create a tune full of building grooves and sneaky surprises. Mad Roy will shake the foundations of the biggest clubs.

Latest release: Elementi Compatibili EP, Modern Heads: Our fourth release is a journey into magnetic realms and cosmic orbits from Modern Heads with the ‘Elementi Comptabili’ EP. Modern Heads is the production brainchild of Dino Sabatini and Gianluca Meloni, who together have pioneered their version of timeless techno, always capturing their vision of the future in the present. Elementi Compatibili comprises of four elements. Elemento A and C are both beautifully crafted ambient excursions, both softly navigating their way along celestial paths.

What a feast of music and an absolute celebration of some of the most enterprising people working in the Australian music industry right now. We’re thrilled to be showcasing this selection at Machine and urge all lovers of our scene and music to come and enjoy it in the one place.