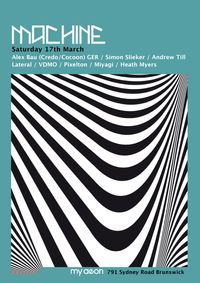 Saturday March 17 marks an important date on the calendar for us at MACHINE with our first international artist of the year. We welcome Frankfurt based electronic pioneer Alex Bau

ALEX BAU (CREDO / Cocoon) is the quintessential techno artist. His tenure in the industry flows across decades. His involvement runs across multiple labels, the influence of which is enduring. He is the complete package: a self confessed child of the 80’s New Romantic and early electronic boom whose interest lead him to the nascent party scene of Germany, to a path of dj’ing. Cutting his teeth at temples of electronica like Liberia where he met Sven Vath and Chris Liebing who were doing the same. A DJ career spanning decades which then evolved into the adjacent paths of promoting parties like the iconic Silo events in the German country side, which evolved into a massive production career in which he has released on an incredible array of labels including CLR and Cocoon. This eventually lead to the establishment of his own Credo imprint which has now been in operation since 2007. Alex doesn’t hunt publicity and has beautifully kept his humanity. Very much in the school of thought underpinning the unwritten ethos of techno: that we do it for the love, we instil our soul and we sidestep the bandwagon. We’re so happy to have him for Machine in what is a solo Australian show. Yes a massive waste given the kilometres traversed, but a special privilege for us and all who support us. We eagerly await you Alex. https://soundcloud.com/alexbau https://www.beatport.com/artist/alex-bau/7389

Meanwhile in the main room we’re honing in on the beating heart of MACHINE, the four artists that keep the engine ticking over across the club and the label in a moment of solidarity and celebration of our sound: we bring you Lateral, Andrew Till & Simon Slieker and VDMO .

LATERAL: is a production gun and dj maverick. His style has earnt him plaudits across the country and his releases have garnered support across the Atlantic and Pacific oceans to Europe and the US. Lateral is a Machine Label partner in crime and the Machine dance floor is his scene. https://www.beatport.com/artist/lateral/432076

ANDREW TILL & SIMON SLIEKER Chief architects of the ethos of Machine and the mechanics busy under the hood. More than back line players these two have been headlining rosters for the best part of the last 20 years. Pick up a flyer, tear down a poster, unravel a scroll, dust off a tablet, shine a light in a cave and you’ll likely find one or both of these names in bold. For good reason.

VDMO: brings an incredible live projection array to three walls of the main dance floor transforming the space into a a chamber of dimensionality and depth. Programmed live geometric patterns twisting and riffing off the Machine design aesthetic. VDMO brings the visual aspect of the evening to dizzying heights.

Upstairs is a treat, a long awaited delight for those who partied through the 2000’s and what should be an eagerly anticipated showcase for the uninitiated. We bring you three iconic DJ’s who harness the best of the funky acid, electro tech, fat arsed beat movement that you definitely don’t get to hear enough. Enter Pixelton, Miyagi and Heath Myers.

Toni PIXELTON: Hit the ground dancing in the 90’s, making a name for herself in the underground warehouse movement of Melbourne. She made an immediate impact with a ribald funk tempered with massive baselines and 4x4 kicks that laid waste to dance floors. She was the go to dj for a stylish, punk-tech sensibility that spoke to a generation of politically savvy and commercially exhausted punters. Fresh and loud. At her height Pixie as she is affectionately known was resident at the same Melbourne techno institution that Simon Slieker made his name in Teriyaki Anarki Saki. There she won over a new swathe of techno banner fans who are still waving that flag to this day. Welcome back Pixelton!

Miyagi: Another product of the electro boom in late 90’s and 2000’s, Miyagi burst onto the party circuit via the warehouse craze. I still remember emphatic enthusiasts declaring “you’ve got to hear this kid Miyagi, his sets are so unbelievably funky; he’s got it.” And he did and he does. Miyagi is a classic party player, he seizes on the moment and knows when to launch, blending breakbeasts with disco cuts with techno monsters, imagine the spiralling onlsaught of funked up mayhem. That is a Miyagi mainstay and we can’t wait to be swept up in it.

Heath Myers: beat merchant and prog master. Rising from nowhere in the 90’s with a fabled institution called KINETIK. Heath made a name for himself and then some. Busting out in the smooth as silk progressive beat scene that was a thing; bold breaks and rolling extended mixes saw him landing at the institution of SUNNY and later joining up with Miyagi and Simon Slieker and with d-JCB and Max Grill formed up the infamous Semi-Retired DJ’s, who confusingly played an exhausting cycle of shows across Melbourne which in a triumphant apex erupted on the Market Stage at Rainbow Serpent where they hosted the Luau in it’s Sunday Funday hey day. The Luau became an institution which only stopped a couple of years ago but its legacy lives on with the spectacular kaleidoscopic costumery that Rainbow Sundays have become known for. Heath Myers, we’re rolling out the red carpet.

This is a huge party for us and one we really invite you to join us for in all of the inclusive-techno-monochromatic-colour-prismatic-lovely-bassline-driving-mania.