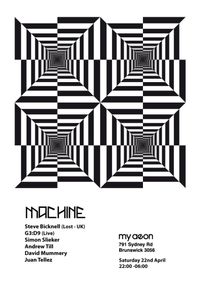 We’ve been fortunate at Machine to host a swathe of artists from near and far who have brought great gifts to our collective table, but none who have such an enduring and marked place in the world dance music community as Steve Bicknell. We urge you to read his extended biography for the clearest sense of who and what it is that Bicknell brings. Just quietly (and there’s nothing quiet about any of this), his dj output as Steve Bicknell, his events as LOST, his productions as The Evader, Kim Bilir and S.B Project and his own name, his labels Cosmic Records, Clubtracks and ID(entity), are all steeped in the kind of historic rhetoric as to be “the stuff of legend”. Things that have been spoken and written about over the course of the last 25 years. And now, he’s coming to us as we present this very special evening with Steve Bicknell.

Do yourself a favour and read his bio for a history lesson: https://www.residentadvisor.net/dj/stevebicknell/biography

And failing that, read this, it’s the last paragraph and it sums up why we’re so excited:

"Steve Bicknell’s productions and LOST has influenced a whole generation of electronic musicians. Yet despite the huge success of both Lost and his personal development as a DJ and producer, Steve has retained a palpable sense of humility and a true groundedness in everything he does. Like the rugged, minimal sound that LOST became known for, the events (and in extension all of what Steve has stood behind), have been indelibly marked by a progressive and uncompromising attitude. There is a pure vision, a complete engagement and deep immersion in the fabric of the music that disregards shallow peripherals and vagaries such as celebrity, fashionability, and kowtowing to media/commercial interests. Steve has remained connected to the roots, eschewing the mainstream, sticking firm to ideals and principles. Steve’s approach has been devoid of posturing or clamouring for attention. It has never been about following trends, but the formation of his own solid identity - an unswerving, singular vision guided by a deep and enduring devotion to the music that inspires him and a desire to present it in the purest way possible, allowing the listener to think and to feel for themselves, unburdened by external association. Founded on and remaining true to a very pure ethics, Steve Bicknell’s attitude and energy shows no signs of faltering anytime soon…” Resident Advisor

Because in an era where commercialisation grips most artists around the throat, threatening their creative integrity; there are some who against all odds hold out. Who remain true to the feeling and vision that first gripped them when they came upon the music… And we’re proud to call that energy in. This stuff matters to us.

Support crew on this special night are:

G3:D9 After a hiatus that has gone a little long our good friend, Melbourne live-techno legend and Machine Label denizen G3:D9 is gearing up for a live exposition of his virtues. We thought about it and knew he was the perfect compliment to the LOST theme, with a gritty, gripping and uncompromising approach that delivers a ribald and raw drum-laden sound. Known for his nuts and bolts approach with linked machines and no computer in the arsenal, G3:D9 remains true to the way of seeing the soul of the machine and evoking whatever twisted alchemy is required to make it hum. Welcome back.

DAVID MUMMERY He may have been born in a SILO, but he’s out on the town tonight. Partner in SILO productions and one the of finest quality DJ’s you will hear. Mummery delivers tightly woven masterpieces of pre-planning and orchestration. This is the techno of a skilled choreographer of tunes; and guaranteed in the equation is the interest he keeps up in the mind, the shuffling of the feet and vibrations through the body. Another fine soul to contribute to this soulful occasion. Perfect.

JUAN TELLEZ Machine Label’s resident New Zealander may have crossed the Tasman long ago, but he’s now left an indelible mark on the techno soundsphere of Melbourne. His sets are compelling portrayals of the layers upon layers that leaf across the techno field, and from them arise new depths. Stand by for his next release: The Temple [MACH033] on Machine Label is a brilliant EP, (bias acknowledged), but honestly Juan’s latest production work combines modular sounds and clever production technique into potent dance floor material; his sound captures the imagination and the heart. And so he too is fitting…

ANDREW TILL Well it wouldn’t be Machine if not for Andrew and it wouldn’t be the same if he were absent. And so on an occasion where it’s all about the heart and soul of the matter, it’s important to signal our very own.

And so the scene is set for Machine gets LOST> come find us on Saturday April 22.

PS> It’s Simon and Andrew’s birthday shindig as well. It’s just that everything else mattered more to write about….

$25 on the door no presales