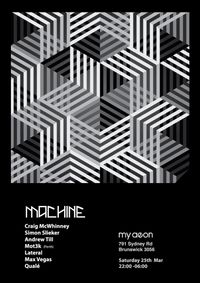 Machine : Techno on the March

Machine on the March. We’ve made much of recent instalments of Machine Club. Big label celebrations, and excursions into all aspects of the Melbourne sound. This one isn’t so easy to define. Not in a label sense, nor a geographic sense. But in standing back and examining the line up, what we’re excited about is the breadth and depth of quality spanning time, place and space.

Join us Saturday the 25th March across two levels at My Aeon, both with purring Funktion One systems, a dual laser array, programmed and operated live by H&S Technologies, and the incredible backyard open air experience when everything else gets a bit much.

CRAIG McWHINNEY Craig McWhinney is a sound savant. Producer, remixer, dj, label founder and manager. Currently making massive waves on the international techno storm front, inspiring a swathe of artists and outlets to add Atrophic Society (his label) and Vohkinne (his alias) to the hot ticket watch list. With remixes and EPs for Electric Deluxe, Southern Lights, Steadfast records, Proiect Squared, Sub Squared, Haul Music, Attemporal, Snejl Black, Theory records, Telrae and our Machine Label, Craig McWhinney is clearly prolific, but far more importantly he is quality. His Atrophic Society imprint has garnered contributions from names such as Brendan Moeller, Echologist, Dj Spider and Material Object. Drawing upon a wealth of DJing experience and a gift for sound design, Craig crosses boundaries with precision and intent, creating dancefloor focussed music with an intelligence that captures mind and body.. His last vinyl release is a storming and refined techno masterclass on Melbourne’s Southern Lights (yes another rocking local imprint, check it out), Versions EP. We are rapt to present you Craig McWhinney; playing for us on the stellar Function one array in the main room, not his first time round at Machine, but without a doubt his most anticipated performance to date. https://soundcloud.com/craig-mcwhinney

MOT3K Mot3k barrel in from Perth for their 3rd show at Machine. The previous two have been blistering performances of exhilarating tunes, flawless execution and rampant enthusiasm. Mot3k are enduring pioneers with a prolific release schedule spanning across multiple labels of both varieties: local and abroad. Their sound covers the complete spectrum of Techno from tough and jackin' through to the deep end of the pool. There’s a distinct European edge to their sound, unsurprising given the duo are English and Dutch originally before calling Perth home. A window into the calibre of their sound reveals high profile support from Richie Hawtin, Marco Carola, Sasha and Carl Cox. The English half of the duo, Dazz K, is an experienced genre transcending DJ, and he will be presenting the MOT3K sound in DJ form for us at Machine. Phew. https://soundcloud.com/mot3k

QUALE Continuing on with the foreign national theme, we bring the long awaited comeback of Melbourne favourite Quale. Of French origin, and enduring legacy born back in the formative moments of the European dance scene, Quale is steeped in a quality that speaks of his vintage. Hints of blackcurrant and aged in Oak from the Belgian border, you can expect a smooth delivery and notes of ecstasy. Of course you’d expect nothing less from that fine techno producing region of the world. https://soundcloud.com/qual-1

MAX VEGAS We’ve admired Max at the plethora of gigs he plays across the festival circuit, clubs, bars and the party scene. Max Vegas is a vinyl juggernaut; never having relinquished the medium he went as far as to take on ownership of Alley Tunes which to this moment is the place to plow through crates of vinyl spanning all electronic genres in Melbourne. Max is a seamless constructor of sound and rhythm; his mixing is impeccable and his selections delectable. It’s an absolute treat to have him at Machine and we can’t wait to hear what he dishes up. Oh and did we mention he’s French? Yep, the theme slowly reveals itself.

LATERAL Machine Label representative and producer of growing, glowing concern. Skylark by day, hanging from ropes off tall buildings, and studio denizen by night, Lateral is an exciting prospect. He’s also, annoyingly one of those producers who is an equally gifted Dj, which is what he will be doing at this Machine. Expect a deep and complex arrangement of sounds over three decks, replete with all the layering and finessed frequencies that multiple sources can enable. https://soundcloud.com/lateraltechno

ANDREW TILL Machine founder and resident maestro. Andrew Till’s tale barely needs telling, so we’ll leave it there safe in the knowledge that his excellence extends well beyond the confines of this page. https://soundcloud.com/andrewtill